A lot of our Random Acts of Kindness were thought of when we first had the idea of doing this project. This 56th RAK was one such idea that came to us right at the start.

People whom we are close to have been significantly affected by the loss of a loved one to dementia and  Alzheimer’s Disease.  Right through from diagnosis to death, this is a dreadful disease, robbing the person of their memory and robbing their family of the loved one that they know. The grief starts long before the death even happens.

Having been through the loss of a parent who was diagnosed with a terminal illness, we have some experience of grief. But she was her until she died. She knew us. Alzheimer’s takes that away; it takes the person away from the body long before they die.

Her father, for whom we did this RAK back in November, suffered from dementia as a result of a stroke before his death and it was dreadful to see him not knowing who people were. In some ways we were grateful that, for him, his suffering was for a short period of time. We can only imagine the impact that Alzheimer’s must have had on our close family members.

Not only that, the nurses and carers who work with dementia sufferers every day are incredible. We imagine it to be a difficult job indeed. After all, once the residents are in a care centre for dementia there’s not exactly going to be a good outcome and the nurses and carers must deal with this time and time again.  They give up their Christmases, their nights and weekends, all for the caring of others, others who can no doubt be difficult at times.

Over the last couple of days I have witnessed such care and compassion first hand. Whilst sat in A&E with little LJM2 (she has a probably but not definitely fractured leg!) I saw an elderly woman arrive with a carer. The woman obviously suffered from a form of dementia. The carers (I saw her again the next day at the fracture clinic with a different carer) were fantastic with her, despite being accused of hurting her, dressing her in someone else’s clothes and effectively kidnapping her. If it wasn’t so sad, it would have been amusing. The carers’ patience was amazing. I wish I had such resolve with my children’s repeated questions and their irrationality!

Today, we put together the package for this RAK, dedicated to dementia sufferers and their nurses and carers. We sent some reusable pictures designed for dementia sufferers to be able to paint with water, along with some paint brushes. In the end I posted the package as, although I was meant to take it in person, one of the nurses who works there (and the reason we chose this RAK and this place) was working and we wanted to make sure we weren’t seen! 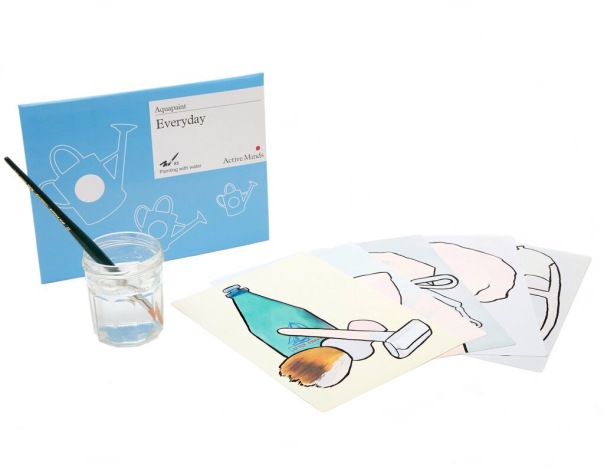 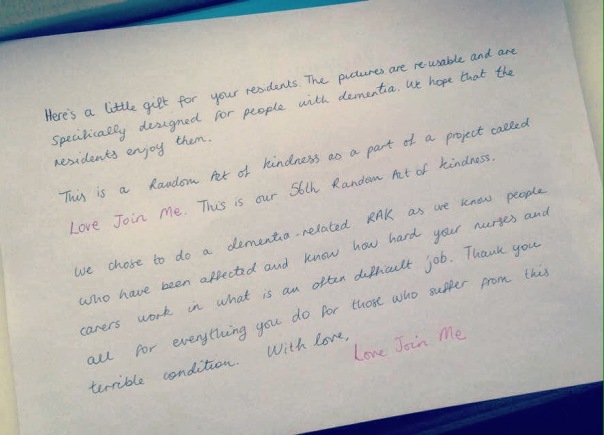